“Tread gently on our hills, Tread gently. You are on hallowed ground.” This message is in an old white clapboard church, now renamed the Flight 93 Chapel. The Somerset church was refurbished and renamed in honor of the passengers of Flight 93. Huddled at the back, the passengers decided to rush the cockpit. Who can forget Todd Beamer’s command of, “Let’s roll!” They battled fiercely to recover the plane and the terrorists had no choice but to crash. Those few courageous Americans saved countless lives.

For almost thirty years, Dennie and Yvonne Rhoads have operated a mini-mart in Somerset PA. Back to the 1800s, Dennie’s ancestors have lived in the area. Dennie graduated from Somerset High School in 1967, and as a junior played football on their last undefeated team. In May 1969, shortly after he was drafted into the Army, to go to Vietnam, Dennie and Yvonne were married in that same church that is Flight 93 Chapel today. In early 1970, with a two-week-old baby girl at home, Dennie left home for a one-year tour in Vietnam operating in a recovery unit between Da Nang and Quang Tri.

Rhoads Mini-Mart has an old-fashioned feel. It has all the new-store amenities and products. But over on one side is a smaller room that holds extra stock, a lottery machine, old signs and promotional items, and a well-worn wooden park bench and assorted rocking chairs. Daily, elderly local men sit back there and drink coffee and solve the world’s problems. That room makes it much more than a convenience store. Rhoads’ is a place for life-long friendships. Returning from Vietnam, Dennie worked six years in a coal mine. He enjoyed the camaraderie of the underground world. The joyful way Dennie describes work in the mine illustrates that he is a person who sees the glass as half- full, someone you would like to have as a partner, or next to you in a foxhole. After the Flight 93 crashed, Dennie transported soup and sandwiches to Police and the FBI. When asked by the Daily American, Somerset’s newspaper, how he felt about volunteering, Dennie said, “I’m very patriotic and this means a lot me. It’s hard to describe. It’s wonderful we can honor the families for the sacrifices they made.”

Somerset has a rich history and was the central stage of the Whiskey Rebellion of 1794. In 2002, nine miners trapped by flooding 240 feet underground for 77 hours were all rescued in the Quecreek coal mine. Somerset has ski resorts nearby and Mt. Davis, which has Pennsylvania’s highest elevation. Its local vineyards produce a wide variety of wines. 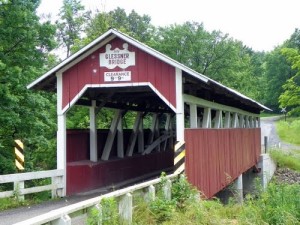 Dennie took me to the Flight 93 Memorial through the Glessner Covered Bridge. Built in 1881, the bridge spans across Stony Creek. Driving through picturesque green mountains, we crossed this spectacular bridge. How ironic that we were headed to one of America’s famous disaster sites passing through one of our most beautiful old structures. Dennie knows the people in all of the houses we passed. His uncle lived there and a cousin lived there. We passed one quaint house and Dennie quietly said, “My friend Gordy Kimmel lived there. Gordy didn’t make it back from Vietnam.” Flight 93 crashed onto a reclaimed strip mine. Driving into the National Park, it has a surreal feel, a flattened mountain with moss-like vegetation starting to grow on the rolling treeless hills. Dennie used to hunt grouse and small game on the adjacent farm, owned by his aunt and late uncle, where now stands the wall of names honoring the heroes of Flight 93. It is a haunting experience for anyone. But for Dennie, a military veteran with his history in the area, and the personal experiences he had volunteering with his family, friends and neighbors, one can sense the exponential effect this memorial has on him, and how much Dennie loves America. Yvonne is one of five girls all raised in Somerset. Her sisters live all around the country. Yvonne’s mother said to her, “You’re the only one who stayed.” Yvonne lifted a finger and pointed to Dennie, smiled and said, “I stayed because of him.” Even after over forty years of marriage, and thirty years working together in the store, one recognizes the true friendship and genuine love between Dennie and Yvonne. She is a registered nurse and continued working as a nurse the first year they had the store. They raised three children who all live close by; a daughter Paula who is a pharmacist, a son Michael who is very successful in the construction business, and another daughter Jacglen (named after both her grandfathers) who is a physical therapist. They sent the girls to college and paid for their weddings. They have five grandchildren, all boys. Michael bought almost 70 acres of forested land nearby. They hunt and ride quads on this fertile mountainous paradise. Someday Michael will sell the timber on the land to pay for his children’s college education. Dennie is proud of his children’s long-time association and accomplishments with 4-H. Dennie said his kids worked in the store growing up, and learned valuable lessons that helped them forge a strong work-ethic.