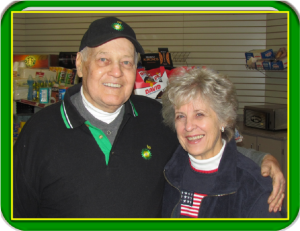 Countywide Petroleum Company Dealer, BP Marketer Erma Dodd lives by several philosophies. One is “Separate Principal from Personality.”  For Erma, “Principal” means the job has to be done right, honestly and fairly. “Personality” means when conducting business, personalities do change but her “Principal” still has to be followed. Another value Erma lives by is “she appreciates her integrity too much to lose it.” A wonderful person, ultimately, Erma’s life is guided by her faith.

Erma father Tony Saveikis was the son of Lithuania immigrants. At age fourteen, Tony began work as a butcher in the West Park section of Pittsburgh. Five years later, at nineteen, Tony bought the shop. Tony met the love of his life when his future bride Lurline came into his store. In the early 1940s when Erma was two years old, Tony found a thirteen acre farm, ten miles west of Pittsburgh. Reluctantly, Lurline agreed to move to the “country.” A short time later, a new Route 22/30 cut through their property and that meant traffic and travelers. Tony built one of the first motels west of Pittsburgh. Would they name it Tony Town or Tonydale?  Their second daughter was named Toni so they decided to name it Tonidale. Motel business operates around the clock so it was logical that a twenty-four hour a day gas station so the Tonidale Gas Station was born. Tony decided the gas station’s midnight shifts would keep an eye on the motel and rent the rooms during the night. The guests needed somewhere to eat so a small diner came next.

In 1961, the “Superhighway,” the new Route put the gas station out of the main stream of traffic. Tony bought a piece of land down the Pike and literally picked up the gas station and moved it to the better location.  Tony bought another piece of cloverleaf shaped land nearby that had a little house and Tasty Freeze ice cream stand on it. On that property, Tony built the Tonidale Barber and Beauty Shop.

In the 70s, Tony built the Tonidale Self-Serve Station that was visible from the Superhighway and the first kiosk was so small it did not have a bathroom. The employees had to run across the street and use the restroom in one of the other businesses. In 1985 that station was branded Amoco and it was slightly enlarged to include an employee bathroom.

Erma fondly recalls a joyful childhood with a brother, sister and a doting mother and father, who were industrious, loved people and treasured each other. On Saturdays when Erma was in 7th grade, she worked with her dad at Tony’s Market. She weighed produce and put it in a brown paper bag and wrote the price on the bag for customers. She dusted shelves and kept the products facing properly.  In the 8th grade, she remembers wearing an apron and working at the Tastee Freeze. The next few years Erma worked Saturdays cleaning rooms at the Tonidale Motel. In the summer after her junior year, she worked in a bank. In 1957 Erma graduated from West Allegheny High School and received the honor as “Most Outstanding Student,” and she was State President of the “Future Business Leaders of America.”

After high school, Erma and her husband owned the Tasty Freeze and began their family. They moved into the little house next to the stand and operated the Tasty Freeze, and raised three sons who came to know all of their customers. After eleven years in the ice cream business, her dad helped Erma and her husband buy the Fort Pitt Motel. They moved into an apartment next to the motel office and worked there from 1969 until her marriage ended in 1987.

Months later, Erma went to the bank and a stranger opened the door for her. Two years earlier, Chuck Dodd, a contractor, had become a widower. Chuck noticed that Erma did not wear a wedding ring and Cupid hit him hard. Simultaneously, Erma noticed this gentleman. After learning she was single, Chuck sent a note to the Bank Manager and asked him to give it to Erma. The bank manager passed the note and arranged a meeting. From then on the bank manager’s nickname became “Cupid.” When they became a couple, the Bank Manager retrieved an image from a security camera that showed the two of them looking at each other that very first day. To this day, it is one of Erma’s most treasured photos. Erma calls Chuck her “Prince Charming.” After they wed, Erma moved from the motel to Chuck’s farm and home atop a hill with no neighbors in sight. She thought she had died and gone to Heaven. No more getting up in the middle of the night to rent rooms. Together in 1992, they bought four acres next to the motel and Chuck, his brother and sons and Erma’s sons built the Aqua Jet West Car Wash. In 2000, Chuck designed and completely rebuilt the original Tonidale Gas Station from the ground up and was on sight when the first shovel of dirt was turned until completion. Married for twenty-five years their combined family consists of seven sons, one daughter, their spouses, twenty-seven grandchildren and ten great-grandchildren.

In 1977, Erma lost her mother; with tears spilling from her deep blue eyes, she recalls raising a glass of wine with her father to toast her precious mother’s memory. Lurline’s untimely death suddenly ended Tony’s drive to expand his business ventures and he was content to just care for and enjoy his family. Sadly, in 1986, after a lifetime of laughter, friendship, love and accomplishments, Tony died and Erma said, “joined Lurline in Heaven.”

In the late 90’s Amoco was purchased by BP. In 2008, Erma signed a contract to become part of Countywide Petroleum Company’s growing family. For years it was known that the bridge on the original Steubenville Pike had to be reconstructed. Finally in 2010, the bridge closed and traffic was cut off. Customers had a detour of two miles to get to the BP Station from the east and local customers from the west had to drive around road blocks to get their BP gas.

Erma has immense gratitude for the help Milo and Countywide Petroleum Company provided during the long fourteen-months that the bridge was closed and that it will still take years to recover from that loss. During the time of the bridge closure, Countywide re-imaged the Tonidale BP which included new dispensers, fresh paint and repairs to the parking lot; and Countywide also extended Erma other financial considerations. Erma says that her BP Station could not have made it without Countywide Petroleum Company’s kindness, understanding, help and support.

To this day, Erma misses her cherished parents and she often wonders what her life would been like without them. Erma knows she is blessed to have been Tony and Lurline’s daughter.